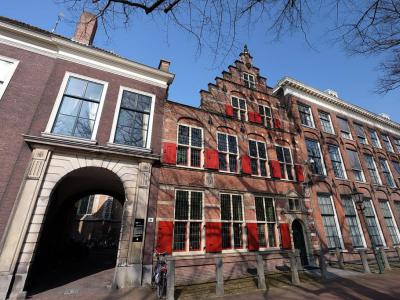 Adjacent to the Monastery Church (Kloosterkerk), the Pageshuis, often erroneously referred to as Pagehuis, stands on a site which originally belonged to the medieval monastery of Vincentius or Predikheeren, served by the Kloosterkerk.

Under the Spanish rule of The Netherlands, the Kloosterkerk was used as a horse stable and arsenal, while its choir housed a cannon foundry. In 1621, an entrance gate, specially for this foundry, was made, and in 1625 the Pageshuis was built nearby.

The building was originally three bays wide – two carved bas-relief heads of war gods Mars and Bellona now mark the original width on the façade. In the 17th century it was extended – one window span to the left; and in the late 18th century the Chinese room was added above the entrance.

The house takes its name from the pages of the Prince of Orange – the young men from prominent families, who were trained as cadets at the Delft Academy. When summoned to The Hague to fulfill their court duties, the boys were quartered here.

The property served to accommodate the pages until 1828. That year, King William I founded the Royal Military Academy in Breda; after the institution moved there, the Pageshuis became part of the Royal Stables.

Between the 19th and 20th centuries, the building served as the headquarters of the Dutch Red Cross. In 1912, Prince Hendrik, chairman of the Dutch Red Cross, had it thoroughly restored. The current entrance is a reconstruction based on a gate on Hartogstraat in The Hague, which also dates from the early 17th century.

Today, the Pageshuis is used as an office; it opens to the public once a year, during the Open Monument Day.
Image by Ben Bender on Wikimedia under Creative Commons License.
Sight description based on wikipedia