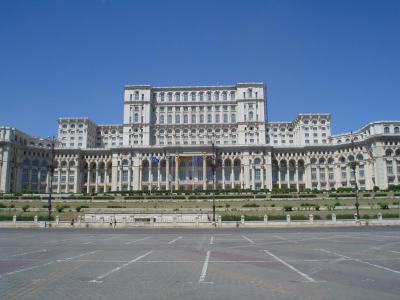 Palace of the Parliament, Bucharest (must see)

The Palace of the Parliament in Bucharest is a multi-purpose building which houses both chambers of the Romanian Parliament. According to the World Records Academy, the Palace is the world's largest civilian building, most expensive administrative building, and heaviest construction. The Palace was designed and nearly completed under the Ceauşescu regime as the seat of political and administrative power. Nicolae Ceauşescu named it the House of the Republic, although many Romanians call it the People's House.

Built on the site of a hill variously known as Spirii Hill, Uranus Hill, or Arsenal Hill, which was largely razed for this mega project in 1980, the building anchors the west end of Unification Boulevard and Civic Center. Constructing the Palace and Civic Center required demolishing much of Bucharest's historic district, including 19 Orthodox Christian churches, six Jewish synagogues, three Protestant churches (plus eight churches had to be relocated), and 30,000 residences. The construction began in 1983; the cornerstone was laid on 25 June 1984.

While the building was intended to house all four major state institutions (in a similar manner to the UK Houses of Parliament), Ceausescu opted to make the palace his personal residence and have the government operate in it (as if confining the Moscow Kremlin to one building). By the time Nicolae Ceauşescu was overthrown and executed in 1989, the building had been almost complete. Some of the initially planned furnishings were never installed, and the last three basement levels and a large clock tower (meant to display the official Romanian time) were never finished.
Image Courtesy of Flickr and Aleksander Dragnes.