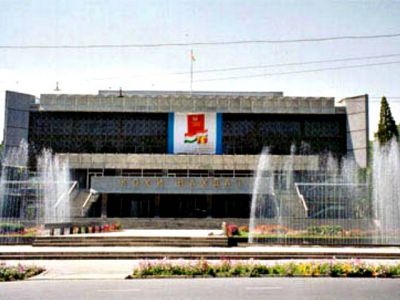 The Palace of Unity, also referred to as Vahdat Palace, is a building in Dushanbe located in the northern part of Dushanbe's main thoroughfare, Rudaki Avenue, near Hotel Avesto and the embassy of Uzbekistan, it is the headquarters of the ruling People's Democratic Party and is also used to host international conferences.

In November 2007, a bomb was left in a plastic bag near a wall outside of the Palace, in an incident labelled by authorities as a terrorist act. A seventy-seven year old man, variously reported to be a janitor, a street sweeper, or a security guard, was the only victim; he was killed at 8:10 AM on 14 November 2007 when he picked up the plastic bag in which the bomb was contained, causing it to explode. The explosion also blew out many windows at the palace.
Image by Beao on Wikimedia under Creative Commons License.
Sight description based on wikipedia

This sight is featured in a self-guided walking tour of Dushanbe, Tajikistan within the mobile app "GPSmyCity: Walks in 1K+ Cities" which can be downloaded from iTunes App Store or Google Play. Please download the app to your mobile phone or tablet for travel directions for visiting this sight. The app turns your mobile device to a personal tour guide and it works offline, so no data plan is needed when traveling abroad.

Relatively small in size, the city of Dushanbe, capital of Tajikistan, sits on the banks of the Varzob River and contains a number of notable sights, significant in terms of national history and culture. The most prominent local landmarks include Rudaki Park, bearing the name of the Tajik poetry classic; the Ismoili Somoni statue and gilded arch; the National Museum of Tajikistan; and more. To...  view more