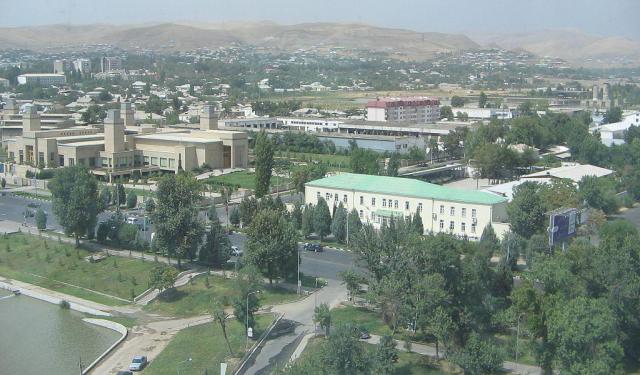 Image by Akhtargorshani on Wikimedia under Creative Commons License.

Relatively small in size, the city of Dushanbe, capital of Tajikistan, sits on the banks of the Varzob River and contains a number of notable sights, significant in terms of national history and culture. The most prominent local landmarks include Rudaki Park, bearing the name of the Tajik poetry classic; the Ismoili Somoni statue and gilded arch; the National Museum of Tajikistan; and more. To explore these and other attractions of Dushanbe, follow this orientation walk.
How it works: Download the app "GPSmyCity: Walks in 1K+ Cities" from iTunes App Store or Google Play to your mobile phone or tablet. The app turns your mobile device into a personal tour guide and its built-in GPS navigation functions guide you from one tour stop to next. The app works offline, so no data plan is needed when traveling abroad.

The Gurminj Museum of Musical Instruments is a museum located in the center of Dushanbe, behind the Office of the Mayor on Bokhtar Street. There are about 100 musical instruments in the Museum collection mostly representing the Pamiri and Badakhshani musical tradition. The collection is dominated by string instruments, such as the tar, rubab, Pamiri rubab, tanbur, dutor, setor, qashqar, and ghizhak. There are also number of drums such as tabl, daf, and doyra.

The collection was gathered by Gurminj Zavkibekov during his trips to his native Kuhistoni-Badakhshon. There are number of other instruments that do not belong the to the Pamiri traditional instruments and some other casual items of antiquariat are for display at the museum. The museum also hosts a variety of cultural gatherings and events, many featuring the Tajik musical ensemble Shams and their soloist Nobovar Chanorov. Gurminj's son Iqbol Zavkibekov is the arts director of the band, which operates out of an apartment near the museum.

Image by Marc pasquin on Wikimedia under Creative Commons License.
Sight description based on wikipedia
2

Ayni Opera and Ballet Theater was built in 1946 and is a classic example of Stalinist architecture. It hosts many performances and plays. The first Tajik ballet was performed here and the culture then started to grow and develop. Later, a new wave of Tajik artists became part the Theater and made it very popular. They participated in Russian and Western classic operas and visited Russia. Here you can attend beautiful performances with highly traditional Tajik features if you happen to watch a performance of foreign artists from any corner of the world.
Image by Veni on Wikimedia under Creative Commons License.
3

3) The National Museum of Antiquities (must see)

The National Museum of Antiquities is famous for its amazing, large Buddha statue, which is almost 13 meters long. They say it is almost 1600 years old and is unique. Archaeologists found it in the city of Kurgan-Tyube and were amazed. You will see exhibitions from early ages, for example, a 6th-century scabbard and many other interesting, antique items that will help you build an image of early Tajikistan.
Image by Ziggy on Flickr under Creative Commons License.
4

Ferdowsi National Library is also called Hall of Science. It was founded in 1933 and built in popular eclectic style, a mixture of Stalinist architecture and national features such as moorish-shaped windows. The library took the name after Abulkasym Ferdowsi. He was a very famous and proud Tajik writer. A thousand years after his death, the government decided to name the library after him. It has an impressive collection of different books about different cultures in different languages; this library has about 2.5 million books, more than 2 thousand manuscripts and many more other interesting things. You will find a lot of interesting literature by Rudaki, Saadi and others.
Image by Brian Harrington Spier on Flickr under Creative Commons License.
5

5) Massive Statue of Somoni (must see)

The Statue of Somoni was founded on September 9th, 1999 and is an attraction worth seeing. Tajik considers Somoni the father of modern Tajikistan. The statue is about 11 meters high. They say that the crown is made almost of pure gold and weighs about 10 kilos. This monument was built in honour of Ismail Somoni, who was a Tajik idol who even had currency named after him. The monument looks great and the huge golden ark above the statue of Somoni looks impressive.
Image by joepyrek on Flickr under Creative Commons License.
6

In 2007 the statue of Lenin was replaced by the statue of Tajik, the poet Rudaky. It was made to honour Rudaki's birthday in 1150 and to emphasize that he was the father of Tajik poetry. It is made of bronze by sculptor Vladimir Kozlov and is an exact copy of a monument previously established in Petersburg Smolny Palace. The statue is very beautiful and is surrounded by a colourful arc with paintings of stars and the sun.
Image by Mr. Gadi Zafrir on Wikimedia under Creative Commons License.
7

Palace of Nations, also known as Kohi Millat, is the place where the President of Tajikistan, Emomali Rahmonov sometimes holds meetings or brings the summit. This place is very important for the country, because all the main events and meetings are held there and questions about future life, politics and economics are solved. It was built in 2002 and is of a very beautiful, white colour; the building is very impressive and has a lot of arched windows. The roof is supported by massive columns. On top, there is a golden dome, which gives the building a rich, serious look. In the middle of the dome there is a flag of Tajikistan. Inside the building, everything is made stylishly and luxuriously and is a truly amazing place to see.
Image by VargaA on Wikimedia under Creative Commons License.
8

This museum was opened in 1934. This museum is a unique place where you may find a lot of worthy information about the lifestyle in Tajikistan, the Socialist Realist style, Soviet-era literature and much more. You will learn how people lived many years ago, how Tajikistan was formed and who was behind it all. This museum has numerous exhibitions that are dedicated to the President - Emomali Rahmon. You will discover archaeological and ethnographic collections that will teach you more about Tajik history.
Image by VargaA on Wikimedia under Creative Commons License.