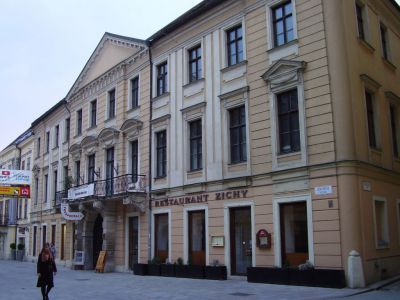 The Palace of Zichy, aka Ziči or Zičiho Palác as they call it in Slovak, is a beautiful piece of Neo-Classical architecture in the historic heart of Bratislava. Renowned for its elegant, strictly classicist facade and Gothic interior, this multi-storey, Baroque-style edifice reveals architectural details typical of the Louis XVI era. It has a large courtyard, in the center of which there is a fountain crowned with a sculpture of a lion with an open mouth.

The Palace was built between 1770 and 1780 for Count František Ziči (Franz Zichy), for which purpose three other medieval houses had to be demolished. In the early 19th century, from 1817 to 1819, the composer Heinrich Marschner, one of the founders of German Romantic opera, best known for his operas Der Vampyr and Hans Heiling, served as a music teacher for the Zichy family and lived in this Palace.

Since its commissioning, the property has undergone numerous modifications. The latest extensive reconstruction took place in the 1980s, during which it was modernized and adapted for various cultural and social events. Today, the Palace serves as a cultural center and is frequently used on festive occasions, such as wedding ceremonies and concerts.
Image Courtesy of Wikimedia and Wizzard.