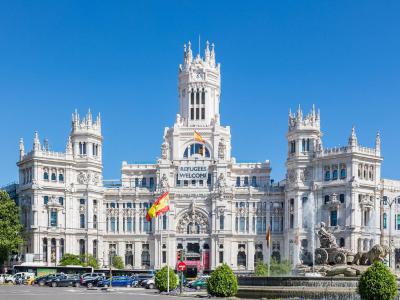 Cibeles Palace, formally known as Palace of Communications and Telecommunications until 2011, is a complex composed of two buildings with their impressive, meticulously decorated white facades. Completed in 1919, it is located on Cybele Square, one of the historical centers of Madrid.

Cibeles Palace is one of the most important landmarks in the city from a Spanish architectural stance. With their Neoplateresque facade and Baroque Salamanca evocations, the buildings are among the finest examples of Modernism architecture in the center of Madrid. The architects were Antonio Palacios and Joaquin Otamendi, two up-and-coming young Spanish architects at the time.

Palacios and Otamendi were also the consultants for the Bilbao Bridge, Madrid Casino and the San Sebastian Bridge. The Cibeles Palace was the beginning of the brilliant career for both architects. The decorative motifs of the facade and interior were made by the sculptor Angel Garcia Diaz, a regular collaborator of Antonio Palacios.

The declining use of postal mail in the late twentieth century gradually reduced the functions of the complex, and, as a result, it began to lose its importance. In 2007 Madrid city government re-purpose it into a cultural center.

Today Cibeles Palace is open to public with exhibitions and events in the grand hall. Visitors can also enjoy food and drinks on the top floor terrace with a beautiful 360-degree view of the nearby historical neighborhood.
Image Courtesy of Wikimedia and Diego Delso.

Want to visit this sight? Check out these Self-Guided Walking Tours in Madrid. Alternatively, you can download the mobile app "GPSmyCity: Walks in 1K+ Cities" from iTunes App Store or Google Play. The app turns your mobile device to a personal tour guide and it works offline, so no data plan is needed when traveling abroad.

Buen Retiro Park, which translates to "Park of the Pleasant Retreat", is one of the main attractions in Madrid. Similarly to Central Park of New York City or Hyde Park of London, this former royal retreat is the most popular public outdoor space in the Spanish capital.

A green oasis in the heart of the city, the park has long been a favorite spot for both locals and tourists to go for...  view more

Similarly to the 5th Avenue of New York, Champs Elysee of Paris, or Bond Street of London, Madrid's Golden Mile is a home to high-end boutiques, stylish cafes, and celebrity chef restaurants. Located in the Salamanca district, this is one of the wealthiest and most expensive neighborhoods of the Spanish capital. The posh area is dotted with grand mansions and some of the most prominent...  view more

Amid the many writers who have expressed their love for Madrid, Ernest Hemingway is the one who did so quite famously. A recognized heavyweight of the 20th century literature - the author of The Sun Also Rises (1926), Death in the Afternoon (1932), The Fifth Column (1938), For Whom the Bell Tolls (1940) and The Old Man and the Sea (1952) - was a frequent visitor to the Spanish capital.

The name of the iconic Spanish writer Miguel de Cervantes is closely associated with Madrid. The author is known for a number of works, but his 1605 novel Don Quixote de la Mancha is often held as the first modern novel.

Despite being regarded as one of the fathers of modern literature, very little is known about Cervantes' early life. Born in 1547, he had spent some of his young years in...  view more