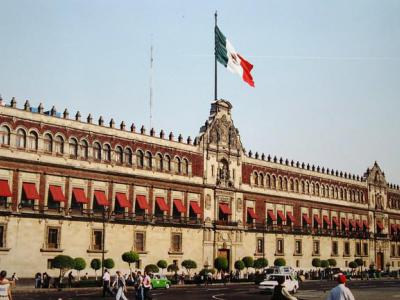 The deep-red facade of the Palacio Nacional stretches grandly across the Zócalo's eastern edge. After the destruction of the Aztec capital of Tenochtitlán, the palace was constructed for Hernán Cortés, though it later became the official home for Spanish viceroys governing the colonies. After independence, it became the seat of government, and the bell from the church in Dolores Hidalgo, Guanajuato, was hung over the presidential balcony. It was this bell that the Roman Catholic priest, Miguel Hidalgo rang while issuing his famous battle cry, or “Grito de Dolores”, which heralded the start of the War of Independence from Spain. On Independence Day, September 15th, crowds of Mexicans and foreigners gather at the Zócalo to hear the president of Mexico repeat the “Grito de Dolores” from the balcony before the national anthem is sung.

The show-stoppers here are Diego Rivera's spectacular epic murals in the north plaza and stairwell. A monumental work of composition and color, Rivera executed this chronicle of Mexico's history between 1929-51. The panel entitled “The Great City of Tenochtitlán” provides a detailed rendering of the Mexica city, viewed from the market in Tlatelolco, while other panels illustrate the period of the Spanish conquest and subsequent centuries of exploitation/industrialization.

Why You Should Visit:
An oasis of quiet and beauty just off the main plaza which is always brimming with people. Great little bookstore on site, as well as a branch of Fonart.

Tip:
Since this is a government building, security is strict: you have to give up either your driver's license or passport to gain entry (easily retrieved on exiting). Bags, bottled water, hats and sunglasses are prohibited. On the plus side, guards are polite and entry (free) is fairly quick.
Follow the signs across the courtyard, and see the vast murals depicting the history of Mexico, which are considered Diego Rivera's greatest work. You will either need to give them a cursory quick-over, or much better – hire a guide or use a detailed guide book to not only understand the magnitude of Rivera's work but the undertaking of centuries of history.