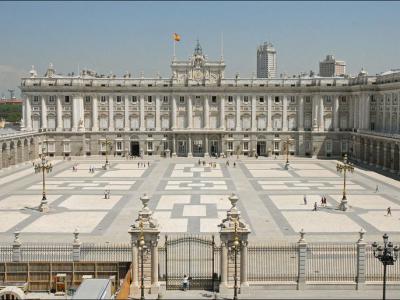 The Palacio Real de Madrid (Royal Palace of Madrid), also known as the Palacio de Oriente (The East Palace), is the official residence of the King of Spain in the city of Madrid, and it is only used for State Ceremonies. However, King Juan Carlos and the Royal Family did not reside in it, choosing instead the more modest Palacio de la Zarzuela on the outskirts of Madrid. The palace is owned by the Spanish State and administered by the Patrimonio Nacional, a public agency of the Ministry of the Presidency. The Royal Palace of Madrid is the largest palace building in Western Europe. It is located on Bailen Street, in the Western part of downtown Madrid, East of the Manzanares River. The palace is partially open to the public, except when it is being used for official business.

Why You Should Visit:
There are 25 rooms you can see in the interior of the palace and they are absolutely amazing, with original silk wallpaper, decorations, furniture, clocks, and other items.
The gardens and the views out the back are also very impressive but at night, the palace is lit up with 1000 lumen spotlights, making it the brightest building in the world.

Tip:
The audio-visual guides are really informative. If you want to see the kitchens you need to check the times as that is by guided tour only.
Do check the opening hours on your day of visit, as it might be closed early due to special occasions.
The Sabatini gardens can also be visited without having to enter the palace.

There have been many writers who express a love for Madrid, but one who did so quite famously was Ernest Hemingway. During his life, Hemingway was a frequent visitor of Madrid, finding in it his muse, popular success and critical acclaim. Don Ernesto, as he was called in Spain, was a frequent visitor to specific sites in Madrid that became major tourist attractions. The majority of those sites are...  view more