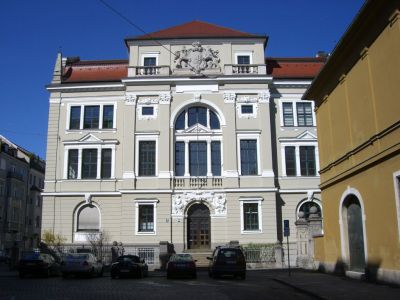 The Paläontologische Museum in Munich is one of Germany’s foremost repositories of natural history exhibits. It is a teaching facility that forms part of the Ludwig-Maximilian University.

The Paläontologische Museum is housed in a building constructed in the 1900s that was once the Urban College of Arts and Crafts. The grand mansion was built to house the college when the university was relocated from Landshut to Munich. It became a natural history museum in the year 1950 with exhibits showing the paleontological and geological history of the Earth.

The Palaontologische Museum has an impressive collection of animal and plant fossils that form the Bavarian State Collection for Palaeontology and Geology. Large dinosaur skeletons are displayed in the grand halls of the mansion. There are skeletons of Mesozoic reptiles, a wooly mammoth with its tusks intact, a saber toothed tiger and a 5 meter tall fossilized tree on display. The highlight is the skeleton of an Archaeopteryx, a genus of the extinct flying Theropod dinosaur that was discovered in the year 1991. The museum often hosts special themed exhibitions relating to biological and geological subjects. There is a coffee shop within the building. Entrance is free and the museum stays open all week, except on the first Sunday of each month. The opening hours are from 8am to 4pm except on Friday when it is open from 8am to 2pm.
Image Courtesy of Wikimedia and Maximilian Dörrbecker.
Sight description based on Wikipedia.