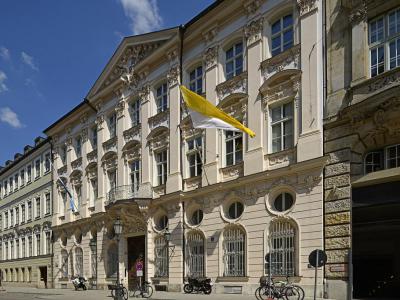 The Palais Holnstein is a large historic mansion commissioned by the Elector Charles Albert in 1733. It is regarded as the finest Rococo-style building in Munich.

The architect François de Cuvilliés, a Belgian-born Bavarian decorative designer, who popularized the Rococo style of building design in Bavaria, architected the mansion between 1733 and 1737. The Elector Charles Albert had it constructed as the residence for his mistress, Baroness Sophie Caroline of Ingleheim, and his illegitimate son through her, Count Franz Ludwig von Holnstein. He commissioned Johann Baptist Zimmermann, a well-known painter and master stucco plasterer, to decorate the interiors.

In 1821, the Palais Holnstein became the Archiepiscopal Palace, the Archbishops of Munich and Freising using it as their residence. The best known resident of the palace is Cardinal Joseph Aloysius Ratzinger who lived here after being appointed Archbishop of Munich and Freising by Pope Paul VI between 1977 and 1982. Later, he served as Pope Benedict XVI, from 2005 until 2013. As a Pope, he stayed at the palace once again during his visit to Munich in September 2006. Visitors are not allowed to view the interiors because of the building’s function as the Archbishop’s residence, but the magnificent Rococo façade is available for all to see.
Image by Fentriss on Wikimedia under Creative Commons License.
Sight description based on wikipedia