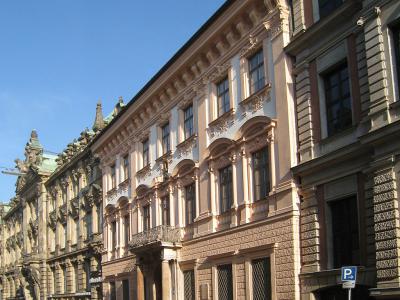 Palais Porcia is a large mansion located near the Residenz Royal Palace in Munich, and is the city’s oldest surviving Baroque-style building.

The mansion was built in 1693 as a family home for the wealthy Fugger Counts, among whom were many bankers and generals, originated from Augsburg, Bavaria. It was designed in Italian Baroque style by the Swiss architect, Enrico Zuccalli, and was the first structure in such style built in the city. The Palais Porcia was purchased in 1710 by the scion of yet another wealthy Bavarian family, the Count Torring. The Elector Charles Albert bought Palais Porcia in 1731 for his mistress, Countess Topor-Morawitzka. In 1736, he commissioned François de Cuvilles to redesign the interiors in Rococo style. The building gets its name from the husband of Countess Topor-Morawitzka, Prince Porcia. Jean Baptist Métivier integrated a concert hall in the palace in 1819. He was commissioned to do the task by ‘Museum’, a cultural organization that had, at that time, purchased the building.

From 1932, the Palais Porcia has housed the headquarters of a prominent Bavarian-based German bank, the Bayerische Vereinsbank. The building was severely damaged by the World War II bombings, but was carefully restored after the war, between 1950 and 1952.
Image by 12345678 on Wikimedia under Creative Commons License.
Sight description based on wikipedia