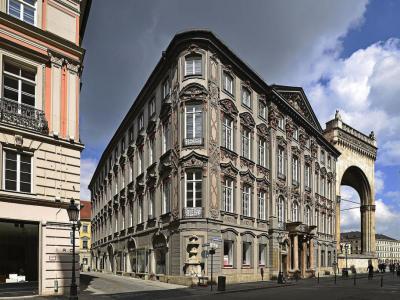 The Palais Preysing was Munich’s first Rococo Style Palace. It served as the residence of the Counts of Preysing and is located opposite the Residenz Royal Palace.

The Palais Preysing was designed and built by architect, Joseph Heffner between 1723 and 1728 for Count Johann Maximilian of Preysing. The Preysing family built another palace nearby called the Palais Neuhaus-Preysing. Locals distinguished between the two residences by calling the older one, the Elder Palais Preysing. The Palace Preysing was almost destroyed by the bombardment during World War II. It was restored in the 1950s and houses high end shops and boutiques today.

The Palais Preysing has a richly decorated stucco facade. The interiors are also embellished with stucco decorations. A notable feature is a magnificent staircase flanked by female statues. Visitors are allowed to view the staircase. The little alley behind the Palais Preysing called the Viscardigasse that connects the Residezplatz with the Theatinerplatz is better known to locals as Drueckebergergasse. Hitler ordered that those who pass the beer hall near the Preysing Place called the Feldherrnhalle should give the Nazi salute in honor of Nazi sympathizers who were killed at the spot during a skirmish with the Bavarian Police called the Beer House Putsch. As a sign of resistance, locals used the Viscardigasse to avoid saluting. Drueckeberger, is a slang word in German for those who do not perform their duty.
Image by Fentriss on Wikimedia under Creative Commons License.
Sight description based on wikipedia

Munich city is a conglomerate of palaces that reflects a variety of styles. The enormous palaces have a long history and some of them have been added to and rebuilt over the centuries. While some were built to be royal residences, others were used as hunting lodges, temporary residences or castles. The palaces reflect a wonderful mix of renaissance, baroque and rococo styles of architecture.

Munich city is a shopper’s delight with departmental stores, large international brands and local boutique shops jostling for space. The main shopping areas are the Neuhauserstrasse and Kaufingerstrasse. The best part about shopping in the city is the bargains that you can get. German style competition ensures that the prices are reasonable. Pick up your favorites from traditional garments, beer...  view more