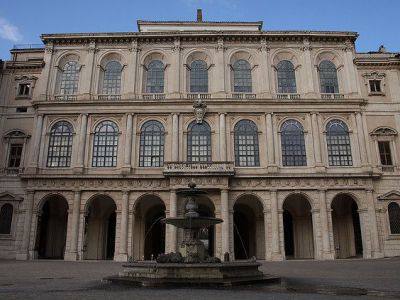 This magnificent Renaissance palace completed in 1633, with several generations of architects working on its design, Carlo Maderno and Francesco Borromini among them, today houses Galleria Nazionale d'Arte Antica, one of the most important painting collections in Italy. The palace also houses the Italian Institute of Numismatics.

***Movie "ROMAN HOLIDAY": Princess Ann's Embassy***
Palazzo Barberini, Via delle Quattro Fontane, is where Princess Ann’s Embassy is during her stay in Rome. Note its wonderfully ornate gate featured in the film welcoming Princess Ann’s delegation, and also in the scenes of her escape from the palace. Either due to availability issues or for aesthetic purposes, interior shots were made in Palazzo Brancaccio, while the interior of Palazzo Barberini was not featured in the film.
Image Courtesy of Flickr and zak mc.
Sight description based on Wikipedia.