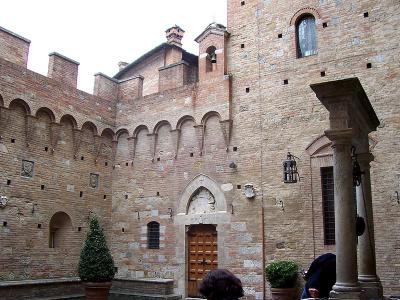 The Chigi Saracini Palace was built in the middle of the 12th century. At one time it belonged to the wealthy and influential Marescotti family. In 1506 it was purchased by Piccolomini-Mandoli who renovated its façade in a Renaissance style. In 1770 the building changed hands again and was purchased by the Saracini family who enlarged the façade in keeping with the line of the street and collected the works of art that adorn the interiors. The Chigiana Music Academy that now operates from the palace was established in 1932 and has produced many illustrious musicians like Carlo Maria Giulini, Salvatore Accardo and Claudio Abbado.

Guided tours are available around the academy today and visitors can view the art collection of Count Galgano Lucarini Saracini. The collection includes statues, bas reliefs, paintings, ceramics, artifacts made of precious stones, ivory and wood. It spans the Renaissance through the 18th century period, including paintings by Botticelli, Sodoma and Sassetta.
Image by MarkusMark on Wikimedia under Creative Commons License.
Sight description based on wikipedia