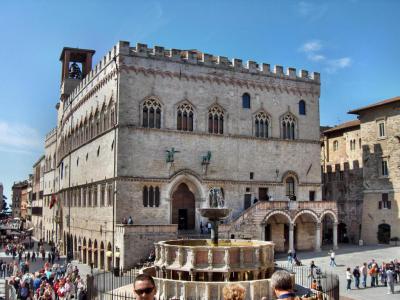 Palazzo dei Priori, built between the 13th and 15th centuries, is Perugia’s town hall. This Gothic construction is one of the city’s most prominent and precious landmarks. The portal, built in 1346, is adorned with sculptures representing the allegories of life, while the bezel site contains statues of the city patrons. It is also home to Sala dei Notari, which consists of eight arches with paintings and frescoes, and Galleria Nazionale dell'Umbria, one of Italy’s most outstanding art galleries. Nobile Collegio della Mercanzia, the offices of the Medieval Merchant's Guild, also stand in their original 14th century form here.
Image by Robertofavini on Wikimedia under Creative Commons License.