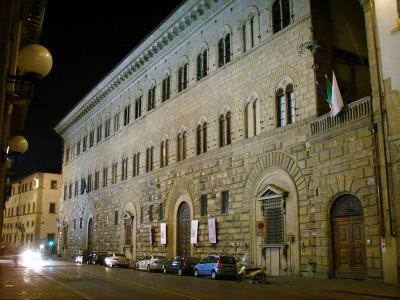 This was the first Medici palace, home to Cosimo the Elder and Lorenzo the Magnificent, while also a workplace for many of the top Renaissance artists, including Michelangelo, who was discovered by Lorenzo while still in his teens.

The most imposing palace yet seen in the city at the time, it set a new standard with its three orders of graduated rustication and large, regular two-light windows; the whole exterior is capped by a massive cornice. The building has an elegant square courtyard in the centre, completely different from the palace’s powerful external impression; together, though, they expressed the two different worlds of the Medici: rich, powerful, even ruthless on the outside, refined patrons of the humanist Renaissance inside.

While the courtyard and gardens are free, and lovely to wander around, it is well worth the admission price to enter the rooms upstairs. The designs, decors, style, furniture, and collections reflect the power, influence and wealth of the Medici family.

The Magi Chapel is tiny, painted floor to ceiling in frescoes by Benozzo Gozzoli that are full of beautiful details (costumes, animals, scenery), and one could spend an hour looking at the reputed likeness of various Medici clan members (not to mention figures such as The Wolf of Rimini – Sigismondo Malatesta). The colors – considering the work was started in 1459 – are incredible and make for a visual feast where the composition is a bit of a whirlwind.

Near the end of the tour is the astonishing Galleria, a completely “over-the-top” Baroque gem with gold-covered walls and an opulent domed ceiling painted with scenes of Greek mythology. There is also an underground sculpture museum in the former stables. There are hardly any queues to get in, and you can enjoy the rooms comfortably and at ease.

Tip:
You must queue up for entry into the building in the courtyard, at the foot of the stairs.