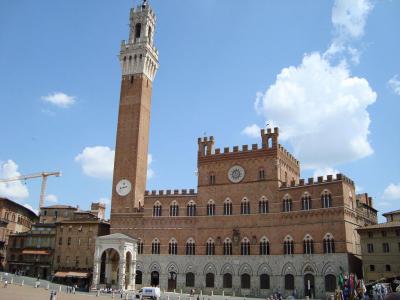 The Public Palace was completed in 1308 after being commissioned by the Council of Nine. It is a fine example of traditional Italian medieval architecture. The first floor is light-colored stone, and the upper floors are made of red brick. The facade is slightly curved inwards to reflect the curve of the Campo Square.

In the center of the facade, you will notice a round bronze plate. The Christogram plate was placed in 1425 to honor Saint Bernardino, whose sermons eased social unrest.

The triforate windows are an architectural specialty unique to Siena. The windows are divided with three arches resting on columns. Visitors will also notice the balzana, or coat of arms of the Town Council of Siena.

The attached bell tower, Mangia Tower, was completed in 1348. It stands at 102 meters, the same height as the Siena Cathedral. The height is also equal to the radius of the square. This was deliberate to show that the church and the state had equal power. The Mangia Tower has a gray upper loggia and a red brick base.

The Piazza Chapel was added in 1352 and features marble statues. The lower loggia was added to fulfill a promise that Black Death survivors made to the Holy Virgin. Visitors can climb the Mangia Tower for panaramic views of Siena.

The internal courtyard is decorated with the coat of arms of families who served on the Council of Nine. Here, you can enter the Civic Museum and see all the world-class frescoes.

The Public Palace is the crown of Campo Square and a great example of Siena's impressive architecture.

You can purchase a combined ticket to climb the Mangia Tower and visit the Civic Museum. Arrive early as the tower tickets sell out fast.
Image by Martin Stiburek on Wikimedia under Creative Commons License.