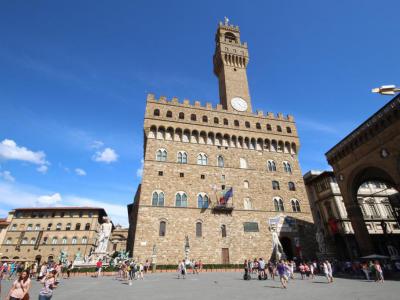 Just like the Duomo complex, Palazzo Pitti and major local art galleries, Palazzo Vecchio, or the Old Palace, is one of the key sites in Florence that is absolutely essential for understanding the history and culture of the city. One of the most impressive town halls in Tuscany, this enormous Romanesque-style palace has been the office of a Florence mayor since 1872. Prior to that (since 1299, when it was built), it has been the seat of Florentine government for centuries. When Cosimo I de' Medici became Grand Duke and moved in with his family in 1540, he decided to enlarge and revamp the Medieval building in Renaissance style.

The solid facade is decorated with shields recounting the city's political history, plus adorned with a series of sculptures among which are the likes of Michelangelo's “David”, “Marzocco” – the heraldic lion, symbol of Florence, Donatello's original “Judith and Holofernes” and “Hercules and Cacus”. A standalone attraction within the palace is the Tower of Arnolfo, access to which costs an additional fee.

Walking through the palace, from the huge Salone dei Cinquecento ("Hall of the Five Hundred" – designed to celebrate the glories and victories of the Duke) to the most intimate quarters, virtually transports one back in time, offering a glimpse into the secluded privacy of the Medici rulers, magnificently decorated as part of the iconographic program designed by Giorgio Vasari. It is hence advisable to take one's time and explore the property without haste, so as to be able to get the historically-intense, artistically-rich experience, quite possibly resulting in a crick-in-the-neck feeling from gazing at the gorgeous ceilings above, one room after another.

There are various add-on tours of the palace available that are fun for kids and don't cost too much extra. Among them, for instance, the 'Secret Paths' tour, lasting about 1h½, delivered by knowledgeable guides and allowing access to the parts of the palace otherwise closed for the public, including the famed "studiolo" with its secret doors, magical objects, and strange, exotic substances.

***MICHELANGELO'S MASTERPIECES***
In the central niche at the south of the large Hall (Salone dei Cinquecento) is Michelangelo's noted marble group The Genius of Victory (1533–1534), originally intended for the tomb of Julius II. The sculpture does not represent a moment of fighting, but rather serves as an allegory of victoriousness. It depicts the winner who dominates the submissive loser with great agility, with one leg that blocks the body of the captive, who is folded and chained. The young man who is the genius is beautiful and elegant, while the dominated man is old and bearded, with a flabby body and a resigned expression. The surfaces are treated expressively to enhance the contrast between the two figures: the young polished to perfection, the old rough and incomplete, still retaining the impression of the heavy stone from which it was made.

***DANTE'S FLORENCE TOUR***
Although Dante is not buried in Florence, the city owns one of the poet's death masks that you can see here, between the Apartments of Eleanor and the Halls of Priors. Resting alone in glass, it came to symbolize both Dante's political contribution to the city of Florence and his pivotal role in the development of Italian literature and culture. Out of interest, this is the same mask that makes an appearance in Dan Brown's "Inferno".

Tip:
If you decide to go on a tour, it is advisable to book directly with the museum by email, stating the preferred date and time, and then wait for confirmation. You will pay upon collecting the tickets on the day of the tour. After it is finished, you can wander freely around the palace at will.
Be aware, though, that since this is an active municipality office, it is quite possible that, on special occasions, the building may be temporarily closed for the public. It is, therefore, recommended to check their website for possible announcements to this effect prior to the visit.