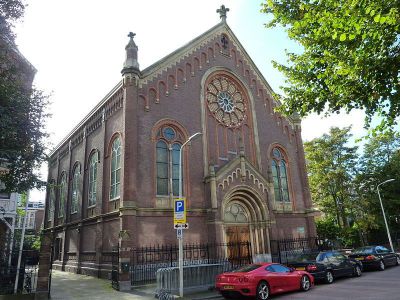 The Paleiskerk (English: Palace Church), also known as the Mennonite Church, is one of the few Neo-Romanesque temples in The Hague. Situated behind Kneuterdijk Palace, hence the name, this single-aisled hall church was designed by the Hague architect Klaas Stoffels as a challenge to the ornate Neo-Gothic architecture prevalent at the start of the reign of King William III.

The church was built in 1885-1886 for the Mennonite community, hence the other name, and is distinguished by wonderful triangular section of the front wall, with a monumental central rose window in the gable, flanked by two large round-arched windows on the façade and several more on the side walls.

In 1964, the ground floor (with the exception of the north façade) and the interior of the church underwent drastic modernization by the architect Sjoerd Schamhart, assuming a different 20th-century style. The organ, custom-made for the Paleiskerk in 1886, was removed, along with the large, three-part pulpit. Similar fate befell the church's chairs, in 2006.

The effects of the 1964 remodeling of the exterior and layout were undone during another restoration, in 2002, by architect Laurens Vis. He returned the Paleiskerk as much as possible to its original state of 1886, with the architectural spatial effect and the interior detailing restored. A small, modern pipe organ, built in 1967, was set up, which was then further modified in 2005.

Since the restoration, in addition to its regular church service, the Paleiskerk has been hosting weddings, concerts, and other public events. The Russian Don Cossack choir has performed here among others, and the Louis Couperus Society hold their annual meetings in April.
Image by Rudolphous on Wikimedia under Creative Commons License.
Sight description based on wikipedia