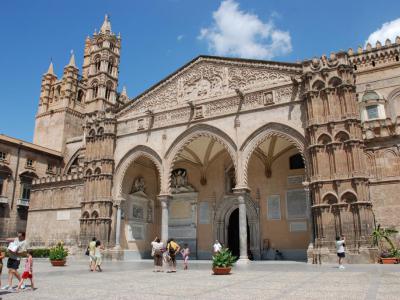 The present Palermo Cathedral has a history of changes, additions and restorations that have given it a mixture of architectural styles. The cathedral was erected in 1185 by Walter Ophamil. Walter was the Anglo-Norman archbishop of Palermo and minister to King William II. Walter's remains currently lie in the Cathedral's crypt.

The entrance to the Cathedral is on the Matteo Bonello Street. The Gothic portal of the entrance is framed by two towers. Above the portal is a niche holding a 15th century Madonna. The broad Gothic portico of the main entrance is on the south side. It has turrets in a Gothic-Catalan style and three arcades, built in 1465.

The interior is planned as a Latin cross. There is a nave and two aisles separated by pilasters. The royal tombs are in chapels on the right.

The treasures of the cathedral are sacred vestments of the 16th and 18th centuries, monstrances, chalices, a breviary of 15th century miniatures and a gold tiara belonging to Constance of Aragon.
Image Courtesy of Flickr and Antonio Manfredonio.