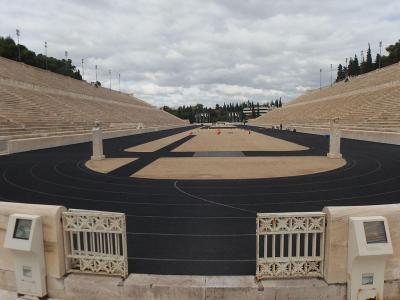 The Panathenaic is the world's only major stadium that was built entirely of white marble. It's also one of the oldest in the world. In ancient times, the stadium on this site was used to host the athletic portion of the Panathenaic Games every 4 years in honor of the Goddess Athena. In 329 BC it was rebuilt in marble and in 140 AD was enlarged and renovated, giving a seated capacity of 50,000. After the late 4th century AD, however, the stadium was abandoned and fell into ruin.

The first international Olympic Games in modern history were held in this stadium in 1896 and King George I of Greece opened the ceremony. Among participants were 241 male athletes from 14 countries, competing in 9 sports and 43 events. The first 9 modern Olympic sports were athletics, cycling, fencing, gymnastics, tennis, shooting, swimming, weightlifting and wrestling. Every four years since then, athletes from all over the world came together to compete against each other. Only the great wars of the 20th century have prevented the normal schedule of the Olympics – but as soon as those wars ended, the tradition went on. The last time Athens hosted the Olympics was, in fact, in 2004. The stadium itself is very nice to visit but note that you'll probably get the best experience with the free audio guide provided.

Why You Should Visit:
It is a beautiful stadium and the place where modern Olympics were born.
The small museum on site offers an exhibition on the history of the Olympics.

Tip:
Make sure you ask for the audio guide (included in the affordable entry ticket) upon entry and then climb to the upper tier for stunning views of the stadium.
Image Courtesy of Wikimedia and Palickap.