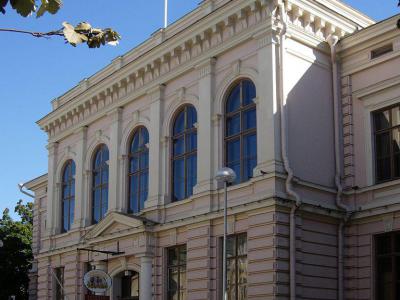 Panimoravintola Koulu is a Finnish brewery restaurant in the city of Turku. Koulu (School) is the largest brewery restaurant in Finland and it is situated in a former Neo-Renaissance-style school building from 1889 by architects L. I. Lindqvist and Bruno Granholm. The school to first occupy the building was "Svenska Fruntimmerskola", which was later renamed as the "Svenska flickskolan i Åbo" in 1916, again in 1955 when it became "Åbo svenska flicklyseum", until finally in 1966 the name was changed to "Cygnaeus skola". On 4 of February 1940 the school was hit by a incendiary bomb, which set fire to the roof and destroyed the assembly hall (now known as the Bellman assembly hall). One of the high points in the history of Koulu was the visit of Commander-in-Chief, Baron Carl Gustaf Emil Mannerheim on 14 February in 1941.

The brewery has four regularly produced beers and one cider. On top of which, the brewery also produces several (at least 12) special or seasonal brews throughout the year. All the beers are made under the regulations of the German purity law, the Reinheitsgebot from 1516. It allows only the use of water, malted barley, hops and yeast.