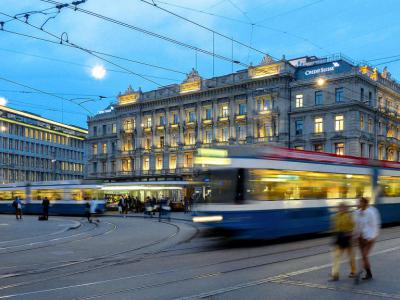 This busy square off on Bahnhofstrasse is lined with famous Swiss banks. It lies right on the tram lines and in the middle of the shopping district. It lies at the intersection of Paradeplatz, Talacker, Poststrasse, and Bleicherweg. Credit Suisse and UBS both have headquarters here. Property here is some of the most expensive in the world, leading the area to be synonymous with wealth.

The present-day Paradeplatz was outside of the original city walls but was incorporated in 1642 with the addition of more ramparts. In the 17th century, the area was a livestock market. It got its name in 1865 at the time that Bahnhofstrasse was created. Trams in the area were first horse-drawn and then electrified in 1896.

The buildings surrounding the square date from the mid-1800s. The Credit Suisse building to the north was build in 1873. The hotel Baur en Ville opened in 1838, and it is Zurich's oldest grand hotel. The building was completely demolished in the 1970s to bring it up to code and make it more comfortable, but the original facade was preserved and reconstructed.

Of particular note on the Paradeplatz is the Sprüngli Cafe, world-renown for their chocolates. This luxury confectionery shop has been open since 1859, though Rudolf Sprüngli had been operating in Zurich since 1836.
Image Courtesy of Wikimedia and SISHION.