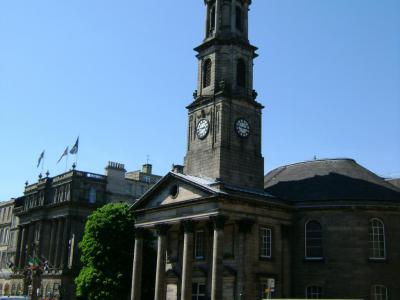 While in Edinburgh, you may want to visit the Parish Church of Saint Andrew’s and Saint George’s, the first church that was built in the city’s New Town.

When James Craig designed the New Town, he set aside two parcels of land for two churches: one at the west end to be dedicated to Saint George, and the other, at the east end – to Saint Andrew.

Unfortunately, Sir Lawrence Dundus, who wanted the plot on the east end for his new house, quickly bought it, leaving a plot in the middle of the street. The planners decided that two churches couldn’t be built so close to one another, so the plans for Saint George’s church were set aside and Saint Andrew’s was built in 1780, dedicated to both saints altogether.

The building has an elliptical plan and was the first church of this architectural style in the land. In the 18th century, classical Roman architecture was in fashion, so the church has a temple-like portico and ceiling rosettes, based on Robert Wood’s 1753 examples found in a temple in Syria.

The steeple, built in 1787, houses eight peal bells that were cast by William and Thomas Mears in 1788. These are the last peal bells and the only surviving Georgian bells in Scotland.

The original 18th century windows were replaced by stained glass windows by Alfred Webster and Douglas Strachan in 1912 and 1934 respectively.
Image by Kilnburn on Wikimedia under Creative Commons License.