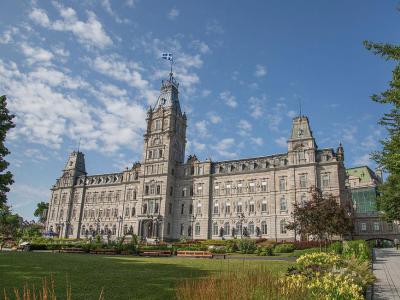 The Parliament Building, house of the National Assembly of Québec, is one of the most impressive buildings in the province's capital city. Located on one of the highest spots of Upper Town, just outside the city walls, the quadrilateral building was constructed between 1877-86 by the French architect Eugène-Étienne Taché. Inspired by the Louvre in Paris, the style of building, Second Empire neo-French Renaissance, is unique in North America. The front of the building also features a pantheon representing the province’s rich history.

Incensed by the Durham Report, in which the British lord said that the French-Canadians could not be civilized because they had no history, Taché included 15 statues depicting important figures in the province's history, to show that they did indeed have a strong past. Figures include Samuel de Champlain, Louis de Buade de Frontenac, James Wolfe, the Marquis de Montcalm, and, at the very top, an indigenous family. As the province's political life continues to grow, so does the number of statues; there are 26 statues featured on the building's facade and more scattered across the grounds.

Since it is still a functioning government office, the only way to see the interior of the building is to take a free guided tour. At 45 minutes long, the tour provides a great opportunity to appreciate the unique architecture of the building, as well as gain insight into Québec's history and political scene. Make sure to have a photo ID with you, however; otherwise you won't pass the security check. In the summer, outdoor tours are also given to discover the surrounding gardens, which highlight the many trees and flowers of Québec and also give an overview of the many sculptures. All tours leave from the visitors center.

Why You Should Visit:
The building is just bursting with history. The architecture, paintings and stained glass windows are simply breathtaking.
The free tour (English/French) is conducted very well, giving one a good understanding of how the government operates.
The restaurant is outstanding and honors Quebec cuisine, with many of the ingredients being grown in the Parliament’s garden. Good prices, too!

Tip:
Note that you must have reservations to eat at the restaurant serving the Provincial Assembly when in session.

Opening Hours:
Mon-Fri: 8am-5pm, or until the Assembly sittings are adjourned (from the first Tuesday of September to June 23 – except statutory holidays);
Mon-Fri: 8:30am-4:30pm, or until the committee sittings are adjourned; Sat, Sun: 9:30am-4:30pm (from June 24 to first Monday of September – including statutory holidays)
Image Courtesy of Wikimedia and Tony Webster.