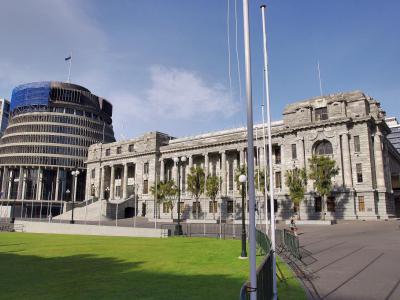 New Zealand Parliament Buildings are the houses of the New Zealand government. There are four different buildings on the site, each built in different times and for different purposes.

The first parliament building was the Parliamentary Library, completed in 1899. It was designed in the Gothic Revival architectural style. A massive fire burned most of the parliament buildings in 1907. Only the library survived thanks to an iron fire-door and masonry construction.

The second building was the Parliament House, finished in 1922. It was designed in the Edwardian neoclassical architectural style by architect John Campbell. It contains the debating chamber, the speaker's office, committee rooms and the visitors' center.

The third building is technically a wing rather than a freestanding structure. This is the Beehive, completed in 1977. It was designed by Sir Basil Spence to resemble a beehive with its circular, tapered shape. The Beehive holds a number of parliamentary offices. There is also a restaurant on the third floor.

The most recent addition to the New Zealand Parliament Buildings is Bowen House, which was added to the site in 1991. This is home to the MP's offices and support staff.