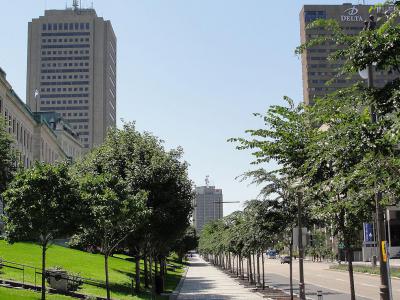 Parliament Hill is located in Quebec City in the borough of La Cité-Limoilou, specifically in districts of Vieux-Québec—Cap-Blanc—colline Parlementaire and Saint-Jean-Baptiste. In addition to the Parliament Building of Quebec, the Hill has a few shopping streets and residential areas and public green spaces. In 1985, the complex of parliamentary building was declared as National Historic Site of Quebec. To date this is the only site so declared in Quebec. Parliament Hill is adorned with several monuments, bronze statues, parks, squares and promenades.
Image by Loveless on Wikimedia under Creative Commons License.
Sight description based on wikipedia