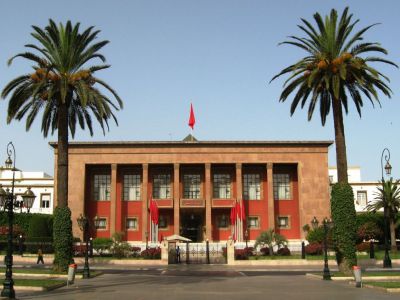 The Parliament of Morocco is located in Rabat. Since 1996, the national legislature has become bicameral and has therefore two parliamentary chambers: the Assembly of Representatives or the lower house, and the Assembly of Councillors. The Members of Parliament come from Morocco and the Moroccan-held parts of Western Sahara Part of the reserve powers, the King of Morocco has the right to dissolve the Parliament. In the past, during the "years of lead" under King Hassan II, this right was used extensively, along with suspensions and extensions of terms. Thus, until 1997, not a single elected Parliament was able to complete its term under normal circumstances. The role of Parliament, and the respect of the monarchy for its integrity, has increased considerably since 1999, when Mohammed VI took the throne. However, the power of Parliament is still being limited as it is the King who appoints the prime minister and on proposition from the latter, the members of government.
Image by Pilecka on Wikimedia under Creative Commons License.
Sight description based on wikipedia

Want to visit this sight? Check out these Self-Guided Walking Tours in Rabat. Alternatively, you can download the mobile app "GPSmyCity: Walks in 1K+ Cities" from iTunes App Store or Google Play. The app turns your mobile device to a personal tour guide and it works offline, so no data plan is needed when traveling abroad.

Morocco's capital Rabat is known for its picturesque natural surroundings as well as man-made beauty manifested in a combination of old and new architecture, featuring Islamic and French-colonial styles, abundance of mosques and historic monuments. One of the city's most prominent sights is the iconic Hassan Tower, a 12th-century minaret, soaring over the ruins of a mosque. Follow this...  view more

Rabat is an old city dating back to the 7th century. A long history and great Moroccan traditions make Rabat a very interesting city to visit. Among other interesting attractions, Rabat has a number of unique museums. Take this walk in order to see some of the most amazing museums of Rabat.

Sale is the twin city of Rabat and it is located just across the Bou Regreg River. It is also a very old settlement with a rich history and some very interesting and fascinating attractions. Take this walk in Sale in order to see its most famous tourist attractions.