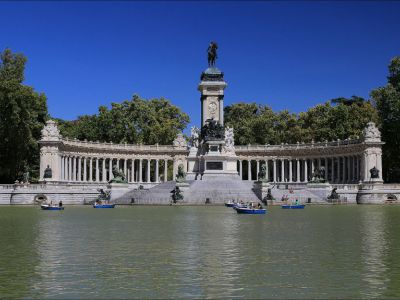 If you would like to mix history with greenery and entertainment, you should really take your picnic lunch and spend a day in Buen Retiro Park, not far from the Museo del Prado, because here you will find something to keep everyone happy.

The park's main attraction, undoubtedly, are the lovely gardens, including the Rosaleda Rose Garden, where you can see the Fountain of the Fallen Angel, the only statue in Madrid depicting Satan. The gardens were once part of the Buen Retiro Palace and were opened to the public in the 19th century.

In the northern part of the park, in front of an equestrian monument to King Alfonso XII, is a huge artificial pond, called Estanque del Retiro. A special place within the park is dedicated to the Bosque del Recuerdo, a memorial garden commemorating the 191 civilian victims and one special force agent who died in the terrorist attack of 11 March 2004. This Forest of Remembrance, formerly known as the Forest of the Departed, was inaugurated by King Juan Carlos and Queen Sofia in March 2005.

Among other interesting features of the park are the buildings for temporary exhibitions, such as the Velazquez Palace, the Crystal Palace, and the Cason del Buen Retiro which is the Study Centre of the Museo del Prado and has a wonderful 17th-century ceiling fresco depicting the Apotheosis of the Spanish Monarchy by Luca Giordano.

Aside from that, the Retiro park is a favorite haunt of street musicians, fortune tellers, puppet shows and plays host to the Annual Book Fair. If you are feeling muscular, you can hire a rowing boat, and if not, you can go for a ride in a horse-drawn carriage.

Why You Should Visit:
This park is a work of art; a dedication to getting outside and enjoying the beauty of nature.
With more than 15,000 trees and a lake on 1,4 km2, it is a definite must-see in the capital of Spain.

Tip:
Pack a picnic & drinks. The food is on the high end, but there are plenty of spaces for you to sit and eat peacefully.
Note that food vendors have toilets for the public to use free of charge (bring toilet paper).