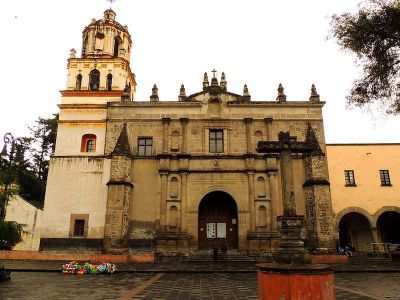 Parroquia de San Juan Bautista, aka Iglesia de San Juan Bautista or Iglesia de Coyoacán, is a 16th century Catholic church and former mission dedicated to Saint John the Baptist, presiding over the south side of Plaza Hidalgo. To build this church, eight years after the conquest was completed, Hernán Cortés granted to a group of friars of the Roman Catholic Order of Preachers, better known as the Dominicans, a vast plot of land which he, in turn, had received from the native Ixtolinque chief baptized into the Catholic faith under the name of Juan de Guzmán.

Going in fits and starts between 1522 and 1552, the construction took place on the site of a calmecac, a school for the sons of Aztec nobility, whose ruins still remain beneath the cloister. In the course of over four centuries since, the original basilica has been remodeled several times, including in 1804 and from 1926 to 1947. In front of the church entrance is a cobblestone square that originally extended into what is now Plaza Centenario. A four-story bell tower, added in the 18th century, stands to the west of the main church and was once topped by a dome, lantern and cross. Sadly, the dome collapsed during an earthquake in September 2017.

The relatively plain facade of the church features the Herrerian style, named so after the Spanish architect and mathematician Juan de Herrera, and is almost entirely devoid of ornamentation. An inscription in Latin above the door translates to, “There is none other but a house of God, and this a gate of the heavens.”

Contrary to the plain exterior, the interior is quite exuberant in Baroque style, with gorgeous archways and illusion-inducing ceiling frescoes depicting scenes from the life of Jesus Christ and the saints of the Franciscan order. A single nave flanked by seven small chapels culminates in the magnificent Chapel of the Rosary, with its lavishly decorated high altar embellished with the glow of gold leaf and the Dominican order's coat of arms bas-relief featuring fleur-de-lis cross whose petals symbolize the 12 apostles.

In 1934, the church was declared a national historic monument, and in the 1980s became the site of an alleged Apparition of the Virgin of Guadalupe. If you can’t go to a city without exploring a few churches, the Parroquia San Juan Bautista will surely not disappoint!
Image Courtesy of Wikimedia and Öskr Rck.