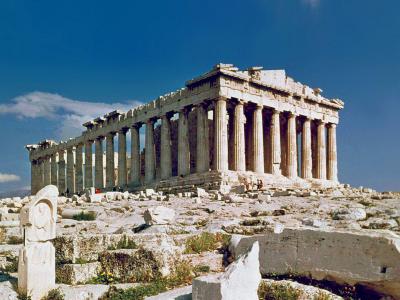 Parthenon is the most imposing structure sitting at the very top of the Acropolis which still evokes a great deal of awe, particularly at a close range. It was built around 440 BC in gratitude to goddess Athena, patron of the city, for her blessings during the war with the Persians. Climbing to the temple, albeit not difficult as such, is a bit challenging in terms of taking care not to slip along the way. Still, the Parthenon is well worth it and is a great spot for taking pictures, given the panoramic views of Athens, the port of Piraeus and the Aegean Sea opening from up there.

The construction of the Parthenon was commissioned by Pericles, leader of the ancient Athens metropolis, while Phidias, a renowned master sculptor and mason, supervised its ornamentation. The building itself makes one of the best examples of Doric architecture in Greece; however, the sculptural embellishment is more of an Ionic order. Guides to the temple often use photos with an overlay showing what it looked like complete with roofs and all the other elements. The nearby Acropolis Museum is worth checking out, in this respect, to see the facade marble tiles and other decorations attesting to the grandeur of this site.

The Parthenon remained unchanged until the 5th century AD when it was converted to a church. Under the Turkish rule, it served as a mosque. In 1687, during the siege of the Acropolis by Francesco Morosini, the Parthenon was bombarded and largely destroyed. Another great damage to it came in the early 19th century at the hands of Lord Elgin of Britain, who looted much of the temple's sculptural decoration and sold it to the British Museum.

Despite that, the Parthenon remains one of the most important surviving architectural monuments of Greece and, over the years, has served an inspiration for many public buildings worldwide: parliaments, universities, museums, libraries and more. All the recent renovations of the Parthenon further reveal the timeless beauty of this masterpiece.

Why You Should Visit:
An imposing monument that still evokes a sense of awe when you see it close up. The views of the city from this point (one of the highest) are beautiful, too.

Tips:
Go to the Acropolis early in the morning – otherwise, you may spend 1-2 hours in the line.
There are two gates at the Acropolis. Make sure you enter and leave at different gates so you don't miss anything.
You will save money by buying a combination ticket which also covers Odeon of Herodes Atticus, Theater of Dionysus, Temple of Olympian Zeus, and Ancient Agora of Athens.