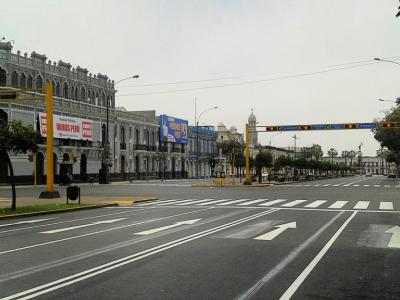 Paseo Colon is an arterial road that runs across the downtown part of the Peruvian capital city. It was built in 1901 to address the needs of Lima's citizens who resided on the city’s outskirts. Under the presidentship of Nicolas de Pierola, the avenue was called 9 December, but later was renamed to Paseo Colon in keeping with its pedestrian nature.

Paseo Colon stretches from the West to the East of the city and comprised five blocks, linking Plaza Bolognesi with Plaza Grau. During the colonial period, the road lay at the southern edge of the town and was surrounded by a protective wall. At that time, the avenue was lined with beautiful old houses, yet the locals were tired of having too many classical buildings around and wanted more of French architecture in their midst to give the area a distinct look. Pursuant to this desire, four urns made of marble and four statues depicting seasons of the year were brought in from Plaza Mayor.

Over the years, several important additions, such as Parque de la Exposicion, Italian Art Museum and the National Art Museum, have been made around Paseo Colon. Tourists just need to stroll down the avenue and explore the many places of Peruvian art and culture on their way.
Image by Martintoy on Wikimedia under Creative Commons License.