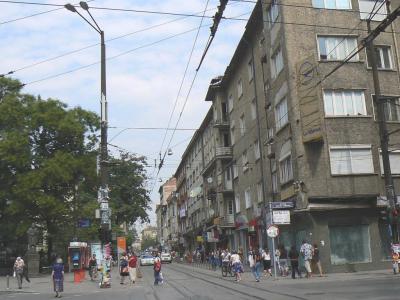 Patriarch Evtimiy Square, more popularly known as Popa, is a small urban square and a busy intersection in the centre of Sofia. The square was named after Evtimiy of Tarnovo, Patriarch of Bulgaria from 1375 to 1393 and one of the most important figures of medieval Bulgaria; a monument to Evtimiy by sculptor Marko Markov has adorned the square since 1939.

Patriarch Evtimiy Square is located at the crossing of the car-free Graf Ignatiev Street, Vasil Levski Boulevard and Patriarch Evtimiy Boulevard, which branches off Vasil Levski at the square. Due to its central location, between Sofia University and Orlov most to the east and the National Palace of Culture to the west, it is a very popular meeting point, particularly for teenagers and young adults. The square is well connected to many parts of Sofia through the nearby tramway, trolleybus and bus stops; many routed taxicabs of the marshrutka network also pass near the square.
Image by Todor Bozhinov / Martyr on Wikimedia under Creative Commons License.
Sight description based on wikipedia