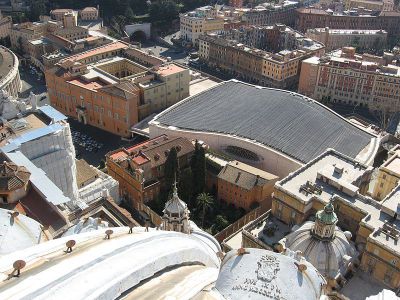 The Paul VI Audience Hall is a building in Rome, located mostly in Italy and partially in Vatican City, but the Italian part of the building is an extraterritorial area of the Holy See used by the Pope as an alternative to Saint Peter's Square for conducting his Wednesday morning General Audience. The building, with a seating capacity of 6,300, was designed in reinforced concrete by the Italian architect Pier Luigi Nervi and completed in 1971.

One of the more arresting features of the hall is the twenty-meter-wide brass and bronze sculpture La Resurrezione ("The Resurrection") by Pericle Fazzini. On May 25, 2007 it was revealed that the roof of the building was to be covered with 2,400 photovoltaic panels, generating sufficient electricity to supply all the heating, cooling and lighting needs of the building throughout the year. The system was donated by a German manufacturer, Solar World. It was officially placed into service on November 26, 2008 and was awarded the 2008 European Solar Prize in the Category Solar architecture and urban development.
Image by Bahnmoeller on Wikimedia under Creative Commons License.
Sight description based on wikipedia