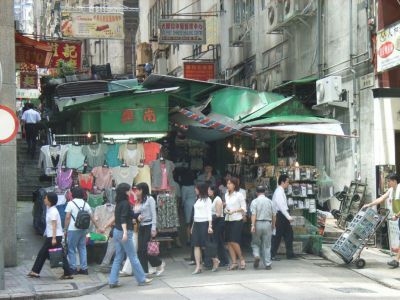 Peel street, together with Graham Street Wet Market forms the old street market area of central Hong Kong. The market stalls are located at the street's lower end, featuring mostly fresh food but also clothing and other items. Along with food stalls, there are also many cafes and dining places. The road was built in the 1840, at the start of the colonial era, and named for British Prime Minister Sir Robert Peel. Initially settled by Westerners, Chinese took over the area in the 1870s, and the expatriates had all but gravitated towards Conduit Road in the Mid-Levels by about the 1950s. Wai Siu-pak, founder of Yee Tin Tong pharmacy, once lived in Wise Mansion, a large house at the top of Peel Street next to Robinson Road. The section of Peel Street between Hollywood Road and Staunton Street was known for its calligraphers specialised in making signboards in the 1950s and 1960s. The part below Hollywood Road was well known for its Indian curry restaurants. However, expensive rents have driven these trades out of the area, which is now populated by modern tower blocks. The century-old Graham Street market is situated at the lower reaches of Peel Street. There is also the Ho Hei Kee Umbrella, run by Mr. Ho Hung-hei, which has attracted the attention of many mass media.
Image by KennethTom on Wikimedia under Creative Commons License.
Sight description based on wikipedia