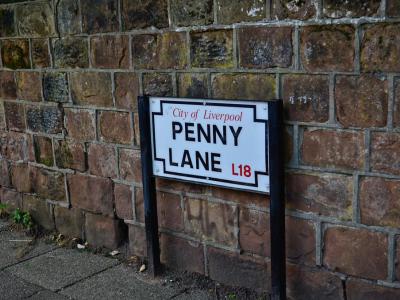 Penny Lane, a fairly typical suburban shopping street in the eastern suburb of Mossley Hill, has become world famous thanks to the Beatles hit that bears its name. It was written by Paul McCartney, who attended St Barnabas Church on the street and often met here his childhood friend and fellow Beatle, John Lennon, before catching a bus to Liverpool’s city centre. The many sights referenced in the lyrics can still be found on Penny Lane, including a bus shelter, a barber shop and a fire station. Street signs bearing the famous name were stolen so regularly that the council began painting the street name onto buildings instead.

“Penny Lane” was released in 1967 as a double A-side single with “Strawberry Fields Forever”, another song which references a Liverpool landmark. Beatles producer, George Martin, believed that it was collectively their finest single. It went to No.1 in the US, but only reached No.2 in the UK charts. The street has grown in stature as the result of its Beatles connections, and has become an attraction for tourists and locals alike. It caused some embarrassment to the council officials at one point, when they proposed that all Liverpool streets named after slave traders be renamed, unaware that Penny Lane was indeed named after the local slave trader James Penny. The famous street thus kept its name, whilst the other street names in the city were changed.
Image Courtesy of Flickr and Jen Hunter.