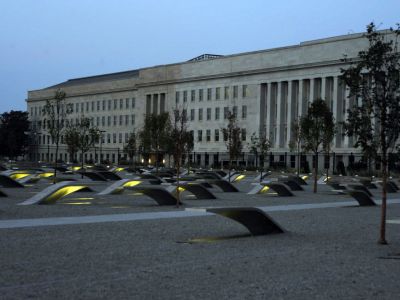 The Pentagon Memorial, located just southwest of The Pentagon in Arlington County, is a permanent outdoor memorial to the 184 men and women who lost their lives as victims of the attack, killed both in the building and on American Airlines Flight 77 in the September 11, 2001 attacks.

Designed by Julie Beckman and Keith Kaseman of the architectural firm of Kaseman Beckman Advanced Strategies with engineers Buro Happold, the memorial opened to the public on September 11, 2008. The Pentagon Memorial was constructed from a design by Beckman and Kaseman of Philadelphia, Pennsylvania, with design support from Buro Happold, that was chosen following a design competition.

To honor the 184 victims, 184 illuminated benches have been arranged according to the victim's ages, starting with Dana Falkenberg, 3, to John Yamnicky Sr., 71, in a landscaped 1.93-acre plot. Each bench is engraved with the name of a victim. The benches representing the victims that were inside the Pentagon are arranged so those reading the names will face the Pentagon's south facade, where the plane hit; benches dedicated to victims aboard the plane are arranged so that those reading the engraved name will be facing skyward along the path the plane traveled. The National Park Service anticipated the memorial would attract more than 2 million visitors per year.

Want to visit this sight? Check out these Self-Guided Walking Tours in Arlington. Alternatively, you can download the mobile app "GPSmyCity: Walks in 1K+ Cities" from iTunes App Store or Google Play. The app turns your mobile device to a personal tour guide and it works offline, so no data plan is needed when traveling abroad.