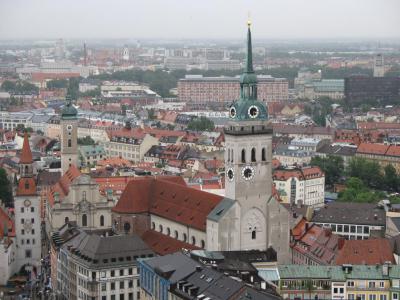 Affectionately called “Alter Peter” (Old Pete) by the locals, Peterskirche is said to be the site around which the city of Munich has evolved. Originated in the 12th century, it occupies the place of an older, 8th-century monastery and pre-Merovingian church.

The monks who lived in the monastery called the hill “Petersberg” (Peter’s Hill). The city is subsequently named after these monks, as “Munchen” derives from the German word “Monch” which means monk. A Bavarian Romanesque temple was first built on this spot in 1180; it burned down in 1327. The present church dates back to 1368. Its spire-topped steeple and Baroque choir were added in the 17th century. Severely damaged during World War II, the building was carefully restored to its original appearance later on.

Inside Peterskirche, you will find 15th-century Erasmus Grasser’s sculpture and paintings by Johann Baptist Zimmerman. Another key attraction is the gilded skeleton of St. Mundita, adorned with precious stones. Visitors can climb 306 steps to the upper platform of the steeple for a breathtaking view across Munich and further afield, towards the Alps, on a clear day. Color-coded circles at the lower platform indicate visibility conditions. A white circle means the climb is worthwhile and the Alps are visible from the up there.

Tip:
It's worth to pay a few euros to climb to the tower's top for a 360° view of Munich. The climb is not easy and definitely not for those with fear of heights – only for the adventurous lot!
If you come before noon, you can get a brilliant view of the Glockenspiel clock in action at Marienplatz without having to jostle with tourists down there.
The are two viewing binoculars allowing to soak up the atmosphere (colored rooftops, etc.).
Note: it might get windy and cold up there.