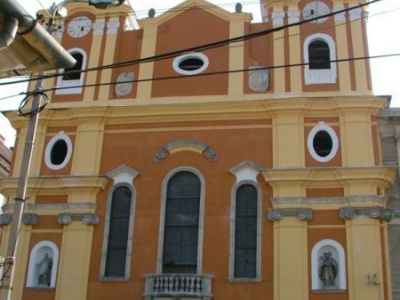 The Piarists' Church, also known as the Jesuits' Church or the University Church, located at 5 Str. Universităţii, and dedicated to the Holy Trinity, was the first Roman Catholic church built in Transylvania after the Protestant Reformation, as well as the province's first Baroque church building. Among the city's most notable edifices, it served as a prototype for numerous other churches in Transylvania. It features a strong contrast between the sober exterior and a very well-decorated, almost exuberant interior. A statue of the Virgin Mary stood in front of the church until 1959, when the Communist authorities moved it to another part of the city.