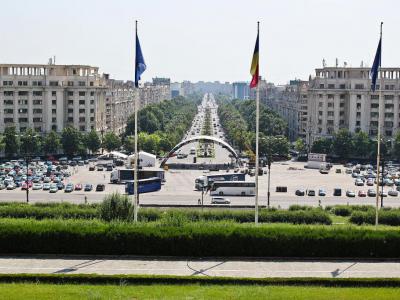 Piaţa Constituţiei (Romanian for Constitution Square), also known as Palace Square, is one of the largest squares in the center of Bucharest, Romania. It lies in front of the Palace of the Parliament (largest building in Europe) and is bisected by Bulevardul Unirii (Union Boulevard) and Bulevardul Libertăţii (Liberty Boulevard). The square is one of the best open air venues for concerts and other public events (parades, etc) in Bucharest. Each year, there is a New Year's Party organized by the city mayor. World-class performers, such as AC/DC, Shakira, Leonard Cohen, Bon Jovi, The Prodigy, Judas Priest and Sting, have played in Piaţa Constituţiei. Lady Gaga performed here to a sold out crowd of 22,000 people on August 16, 2012 during her Born This Way Ball Tour.
Image by Viq111 on Wikimedia under Creative Commons License.
Sight description based on wikipedia