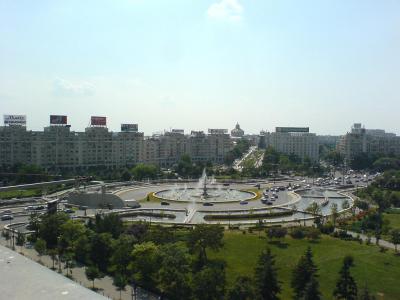 Piaţa Unirii (Union Square) is one of the largest squares in central Bucharest. It is crossed by Bulevardul Unirii and was originally built, during the Communist era, as the Victory of Socialism Boulevard, but then renamed after the Romanian Revolution of 1989.

Although the square lost much of its historical appearance, it nonetheless is very much historical. Back in the early 19th century, it used to be an important commercial hub, with traders from all corners of Wallachia gathering regularly in front of the Hanul lui Manuc to sell their wares. When Bucharest expanded further south, a large market (Piața Mare) appeared here, which gained much popularity with the merchants from Moldova, Transylvania and Bulgaria. So much so, in fact, that, over the years, the increased market had to embrace a number of designated sections: meat (1831), vegetable (1874), fruit (1883), flower (1885), fish (1887), and poultry (1899). The whole complex ultimately took the name of Halele Unirii (Union Halls).

Under the Socialism, in 1985, the last remaining section of the market, Hala Mare (Great Hall), was demolished to clear space for the park at Piața Unirii.

Today, the square is a significant transport hub, containing the Piaţa Unirii metro station and a major interchange for RATB buses, plus a tram terminal near the southwest corner. The Unirea Shopping Center, Cocor department store, and a large taxi stop are found on the east side of the square, while the Hanul lui Manuc hotel is on the north side.

In the center of the square is a small park with fountains which are particularly popular during torrid summer months with both commuters and passers-by. At some point, there were plans to build here the Romanian National Salvation Cathedral, which proved to be technically impossible, though, due to the busy underground environment and little support from the locals; and thence were abandoned.
Image Courtesy of Wikimedia and bogdan.
Sight description based on Wikipedia.