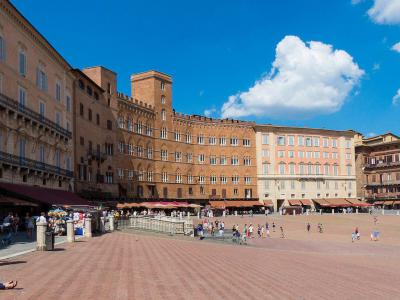 The Campo Square on the site where three ancient towns met and where three main roads intersect. The square was designed to be a gathering site where the entire town could meet and celebrate holidays, enjoy games, or attend political events.

The Campo Square features a red brick fishtail design that was laid in 1349. Eight lines of white travertine cut through the red brick, creating nine sections. The nine sections represent the nine ruling governors who maintained peace and prosperity in Siena from 1291-1355.

The sections also represent the folds of the Virgin Mary's cloak. The Virgin Mary was Siena's patron saint and considered Siena's ultimate ruler. The nine sections radiate out from the central water drain in front of the Public Palace.

In 1297, the government created guidelines to ensure buildings had a congruent appearance. Therefore, many gorgeous, harmonious buildings face Campo Square. The most notable building in the square is the medieval Gothic Public Palace which was home to the Government of Nine and now houses the Civic Museum.

The Palio di Siena, a popular horse race, is held twice a year. The course runs around the edge of the Campo Square and fans pack the square. The yearly road cycling race Strade Bianche finishes at the square. In addition, the Campo Square hosts various Carnival festivities every February.

The Campo Square is known as one of the most beautiful medieval squares in Italy. This gorgeously preserved square is the heart and soul of Siena and the perfect place to immerse yourself in Siena's culture and history.

Enjoy a glass of wine, gelato, or coffee in one of the many cafes and restaurants. Watch the activity in the square and listen for the tower bells ringing.
Image by Fotoperhobby on Wikimedia under Creative Commons License.