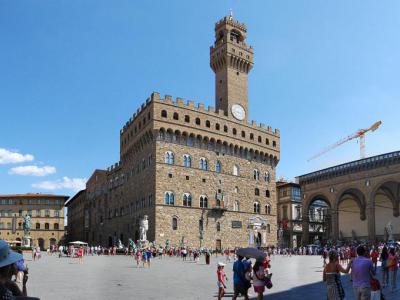 Alongside Piazza del Duomo, the religious heart of Florence, Signoria Square is another key center of attraction in the city – its civil center, presided over by the imposing fortified palace, known as Palazzo Vecchio. Boasting the finest collection of outdoor statues, this square is the birthplace of the Florentine Republic and, as such, is held dear by the locals as an epicenter of the city's social life. The entire area seemingly transcends time and you can easily imagine Michelangelo's “David” standing here, in its original location, now replaced by a replica.

The square has enjoyed central location in the city since the Roman times when it was just as small town of Florentia, with the square surrounded by a theater, a complex of baths and a textile workshop. Later, there were a church, a loggia and an enormous 5th-century basilica added, as revealed by the excavations performed in the 1980s beneath the square during its re-pavement.

The asymmetrical shape of the square, complete with the numerous artworks found within – both large and small, add to its appeal, particularly among the photographers, who flock here in numbers, snapping away frantically in a bid to capture it from every possible angle. Even devoid of camera, standing right in the middle of the square, looking around 360 degrees, is a captivating experience as such.

The imposing seat of the municipal government, Palazzo Vecchio crowns the city skyline and, to one side, just a stone's throw away, is neighbored by an equally impressive Loggia dei Lanzi. An outdoor museum of sorts, it is almost always open to the public and free to access, holding yet another fine collection of statues, including the famous “Rape of Sabine Women”, “Hercules and the Centaur”, and a bronze “Perseus” cleverly positioned so as to be seemingly stared at by the statue of David.

There are a few places to sit here, some out of the sun, but be sure to pace yourself and have plenty of water, if visiting in high summer. Working your way through the crowd can be a challenge but don't always try to walk directly towards your target as you'll invariably keep meeting people doing the same in the opposite direction. It'd be much easier to move a bit like a yacht tacking into the wind – a bit diagonally to the right, a bit more to the left and so on, sidling into the gaps as they appear. Easy-peasy...

Why You Should Visit:
One of the two most important centers of attractions in Florence, along with the Piazza del Duomo.
It might just host the finest collection of outdoor statues in the world and is surrounded by beautifully decorated buildings along with many "very good" to "world-class" museums.
Image Courtesy of Wikimedia and Zolli.