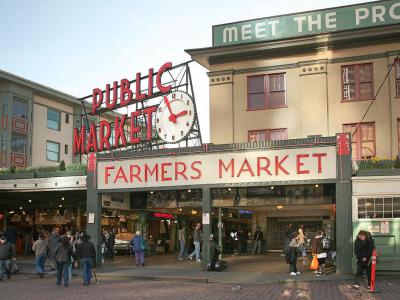 A number of interlinking buildings on several floors, all with knockout views of Puget Sound, form the spectacular Pike Place Market. Seattle's anchor and primary visitor destination began in 1907 with half a dozen farmers bringing produce to the city, to space that was set aside for a commercial market in response to a public demand for lower prices. Over the years, the number of farmers has varied from a high of several hundred in the 1930s to a low of 30 in 1976. Developers wanted to demolish the market, but locals got the issue placed on the ballot and voted overwhelmingly to retain it.

Since then, the number of visiting farmers has stabilized at around 100, but even though it's the country's oldest continuously operated public market, PPM has today become more famous for its other attractions – including charming, eccentric, and individually owned stalls, and buskers or amateur musicians who create a festive atmosphere for visitors.

Under the main arcade (on the water side of Pike Place), you will find a labyrinth of corners, corridors, shops, stalls, and stairs. Magic tricks, old posters, talking birds, books, funky clothes… are but a few of the thousands of items for sale. No chain stores or franchises are allowed, so everyone's an individualist, and there's no shortage of interesting characters.

Why You Should Visit:
One of Seattle's highlights – includes beautiful views of the harbor from various market venues, great authentic local restaurants and shops, colorful produce and food stands, and even great bakeries.

Tip:
A must-see is the kiosk famous for “fish throwing” to a willing customer. This area can get crowded, but just be patient and you'll get your picture/video. The kiosk is right next to a medium-size statue called Rachel the Pig, which makes for a good photo opportunity, too. Bathrooms are available in different areas, just make sure you follow the sign.

This sight is featured in a self-guided walking tour of Seattle, Washington within the mobile app "GPSmyCity: Walks in 1K+ Cities" which can be downloaded from iTunes App Store or Google Play. Please download the app to your mobile phone or tablet for travel directions for visiting this sight. The app turns your mobile device to a personal tour guide and it works offline, so no data plan is needed when traveling abroad.