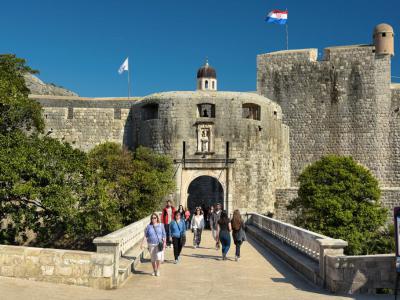 The Pile Gates are a well-fortified complex with multiple doors, defended by Fort Bokar and the moat that runs around the outside section of the city walls. At the entrance gate to the Old Town, on the western side of the land walls, there is a stone bridge between two Gothic arches designed by the esteemed architect Paskoje Miličević in 1471. This bridge connects to another bridge, a wooden drawbridge that can be pulled up. During the republican era, the wooden drawbridge was hoisted each night with considerable pomp in a ceremony which delivered the city's keys to the Ragusan rector.

Today, it spans a dry moat whose garden offers respite from the crowds. Above the bridges, over the arch of the Old Town's principal gateway, there is a statue of the city patron Saint Blaise (Croatian: Sveti Vlaho) holding a miniature replica of the Renaissance-period Dubrovnik. After passing the Pile Gate's original Gothic inner gateway, it is possible to reach one of the three access points to the city walls.

*** Game of Thrones Tour ***
The Pile Gate has been featured in a number of episodes of Game of Thrones Seasons 2 and 3, most notably in Season 2, Episode 6 ‘The Old Gods and the New’. In a scene where King Joffrey returns to Red Keep after Marcella is sent away to Dorne, he gets attacked by the angry mob gathered at the entrance and screams ‘Kill them, kill them all’. The Gate also shows in Season 3, Episode 10 ‘Mhysa’ when Jamie Lannister returns to King’s Landing.
Image Courtesy of Flickr and Jorge Franganillo.
Sight description based on Wikipedia.