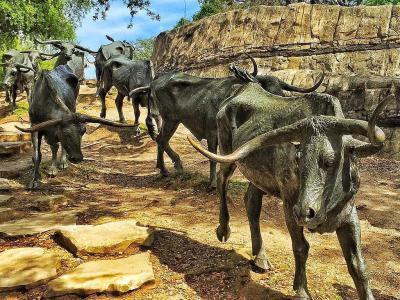 Pioneer Plaza is a 4.2-acre open space – the largest in the central Dallas business district – where a natural setting of native Texan plants, with a flowing stream and waterfall, all combine to memorialize the hundreds of cattle drives that took place at this old junction once known as the Shawnee Cattle Trail. The photo-ops are numerous, and you can wander in through the herd to see how much attention to detail was put into each individual longhorn, from facial expression down to hooves. Created by Robert Summers of Glen Rose, Texas, this is the largest bronze monument of its kind in the world.

The plaza and its accompanying cattle drive were the idea of real estate developer Trammell Crow, who wanted an iconic "Western" sculpture in the city of Dallas and assembled a group to donate the works. The first bronze longhorn was unveiled September 21, 1993, along with the trail boss and his horse; the entire project was completed in 1994. With the striking Dallas skyline as its background, this has become an iconic new landmark in downtown Dallas, and is free to visit.

Tip:
The adjacent Pioneer Cemetery is interesting to walk through, surrounded by tombstones that date back some 150 years.
Image Courtesy of Flickr and Jed Record.