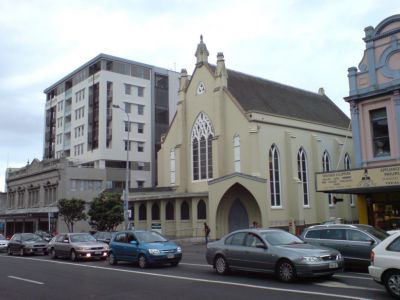 The very first gatherings of the Methodist church began soon after the city was founded – the first services were conducted wherever space could be found. The congregation began to swell and it was deemed essential to find a more permanent home for the church – it seems that the straightforward, everyday language favoured by the Methodist church struck a chord with hardworking and unpretentious settlers. The Methodist Church purchased land in 1864 in Pitt Street with the express purpose of building a church. The foundation stone of the Gothic Revival style design was laid in 1865 and it was officially inaugurated on October 14th, 1866.

The Pitt Street Methodist Church took over the role of the City of Auckland’s leading Methodist church, when the earlier High Street Church was closed in 1877. Following the increase in the Pitt Street church’s role, the buildings on the grounds were extended to include a sizeable hall for church events and the Sunday School. In 1887 classrooms and a lecture hall were also added. The most recent modifications to the complex were made in 1962 with the addition of a vestibule and the removal of internal flanking galleries. Women in the congregation were integral in helping New Zealand women to win the right to vote.
Image by Uploader. on Wikimedia under Creative Commons License.