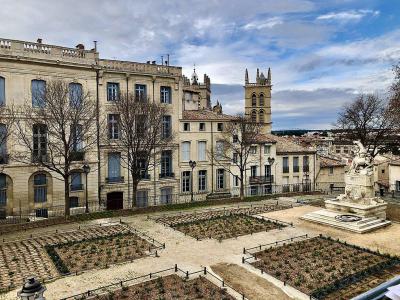 Canourque Square is the oldest, most pleasant square in Montpellier. It was developed over the ruins of a church. It is located in the old city. It is bordered in the north by St. Pierre Street, in the east by City Hall Street and in the south and west by Sainte-Croix Street.

In 1129, Guilhem VI, Lord of Montpellier, chose to build his palace and an oratory on the future site of the Canourgue Street. Guilhem placed a piece of the true cross in his oratory. The oratory was destroyed during the religious wars in 1562.

The Confraternity of White Penitents rebuilt the sanctuary. This chapel was also destroyed in another war of religion. The Penitents decided to place Guilhem's True Cross on a stone column instead and that was destroyed in 1791.

The Fountain of Unicorns, created in 1776, was transferred to the square in 1863. The sculptures on the fountain are struggling sea horses and unicorns and a human figure. The memorial is in honor of the Marquis de Castries for his victory in the Battle of Clostercamp in 1760.

Today the square is lined with buildings from the 17th century. The replacement for the stone column of the True Cross, destroyed in 1791, can be seen in the square.
Image Courtesy of Wikimedia and Valérie Paduano.