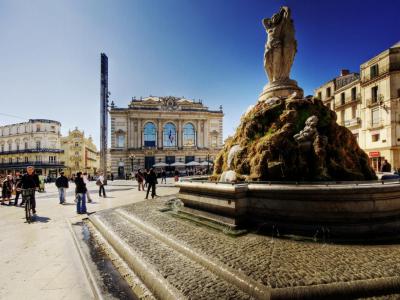 Comedy Square is called a square. But it is not a square. It is an oval. For this reason, locals often refer to it as "the Egg". It is shaped like an egg and it is one of the largest "squares" in Europe. It is located in the heart of the medieval city.

The square extends across the space once occupied by the ancient fortifications of Montpellier, almost touching the Joffre High School (formerly the citadel of Montpellier) and the Charles de Gaulle Esplanade in the east. It is about 756 feet long by 164 feet wide.

The earliest mention of the square is 1755. It was named for the Municipal Theatre, Opera Comedy. The theater burned down twice, the first time in 1785 and then again in 1881. Each time it was rebuilt.

In 1790 The fountain and sculpture of the three Graces, Euphrosyne, Aglaea and Thalia, by the well known French sculptor Étienne Dantoine, was installed in the square. The Graces were the daughters of Zeus. Thalia was Youth, Euphrosyne was Humor and Aglaea was Elegance; three qualities prized in France.
Image Courtesy of Wikimedia and Wolfgang Staudt.