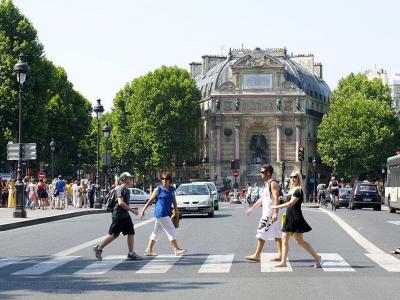 Place Saint-Michel lies in the Latin Quarter, on the Left Bank of the Seine. The square is formed by crossroads of several streets and is also home to the namesake fountain – Fontaine Saint-Michel – built in the mid-19th century. The original plan was to make its central statue the one of Napoleon Bonaparte, but, after criticism from opponents of the demoted Emperor, they decided to make it of Saint Michael, the Archangel. In keeping with the religious theme, the composition includes two statues of dragons, pouring water out of their mouths, and four figures of classical cardinal virtues.

Over the years, Place Saint-Michel has witnessed a number of public demonstrations, including that symbolizing French resistance to the Nazi occupation during World War II. In 1968, Sorbonne students occupied the square, declaring it an independent state, despite the police clubbing the protesters and shelling them with tear gas. It was also a venue of the mass workers movement which led to the downfall of De Gaulle's government. Nicknamed “Washington Square Park of Paris”, Place Saint-Michel has been a favorite hangout for all sorts of “free-minded” folk: hippies, artists, writers, poets, dancers, musicians and students.

The St. Michel high road is an interesting place in its own right. It has a number of cafes and bistros in its higher end, which are usually less crowded and much more authentic. Many good bookstores and stalls are found here as well. Considering that Sorbonne University is just a few blocks away, you can see regular droves of students browsing through the books in a search of bargains on their required reading.
Image by Aleksandr Zykov on Wikimedia under Creative Commons License.
Sight description based on wikipedia